Radon in Denver: What You Need to Know

Of the 74 counties in Colorado, 62 have an estimated average radon level above the EPA’s recommended maximum of 4.0 pCi/L. Denver County is one of these, meaning Denver residents should be especially wary of radon and its effects. Because levels of radon in Denver are estimated to be high, Coloradoans in the greater Denver area should monitor radon levels in their living spaces. What is more, if you live in Denver you should understand what radon is, why you should be concerned about it, and what you can do about it.

What is Radon and Why is Radon in Denver?

Radon is a radioactive gas that you cannot detect with your senses. It has no color, no smell, and no taste. Radon is a byproduct of radioactive solids like uranium. As uranium decays, which happens constantly, it turns into other elements and eventually turns into lead. Along the way to lead, one of the elements uranium turns into is radon. What is interesting about radon is that, unlike all other elements in the decay chain of uranium, radon is a gas.

Because it is a gas, Radon seeps up from the uranium-rich rock beneath Denver and enters our living spaces via the ground. For this reason, radon is often found in basements or other low-lying areas in a home: it is the entry point for this ground-sourced gas. And this flow does not stop when it reaches your basement. It is just most often concentrated in the basement because the basement is closer to the source. Radon gas can even seep into the groundwater that we drink.

When it comes to radon, Denver and other Colorado counties are highly susceptible. This is due to the uranium content of the Rocky Mountains, as well as due to the mining activity that distributed radioactive solids in tailings piles and made it easier for radon to escape from the ground.

You might be thinking that a radioactive gas sounds dangerous, and it is. Radon has been linked to lung cancer among non-smokers and especially among smokers (EPA), and a recent study has linked it to blood cancer, although more research is needed. That said, radon is not a swift actor. It is probably not going to give you lung cancer after just a year of contact; it will take many years. So, if you do have elevated levels of radon in your home you can still act to protect yourself and your family.

Denver’s ABC affiliate ran a profile on the risk of radon in Denver County. They point out that Colorado has one of the highest concentrations of radon in the United States. The article also highlights the fact that many homeowners are not thinking about radon in Denver area. A Denver man reports not thinking about radon until he tested his new home and found radon levels were 2.5 times the recommended maximum at 10 pCi/L. To protect his children, who play in the basement during Denver’s cold winter, he installed a radon mitigation system while it was still summer. This system successfully reduced radon levels in his home to just 0.9 pCi/L. So, while radon in Denver area is a problem, it is not unfixable. Hence, the first step to reducing radon levels is to test for radon.

Radon may sound a bit like a ghost, but it is actually detectable to a high degree of accuracy with the proper instruments. There a number of routes you can take to test radon, and they break down in two key ways: digital vs. analog, and short-term vs. long-term.

Analog radon testing is the old standard of the industry. It involves a charcoal test kit that you set up in a low-lying area of your house or apartment, ideally a basement or crawl space. This kit acts like classic photographic film. As radioactivity from radon bombards the test kit, it makes an impression that can later be analyzed. The more bombardments, the more radon is in your space. The issue with analog kits is the need to send them into a lab and await results. If you have radon in your home, taking action as soon as possible is recommended, and waiting for lab results delays action. That said, these analog kits are some of the most accurate.

Digital radon tests and detectors are part of the new age of radon testing. 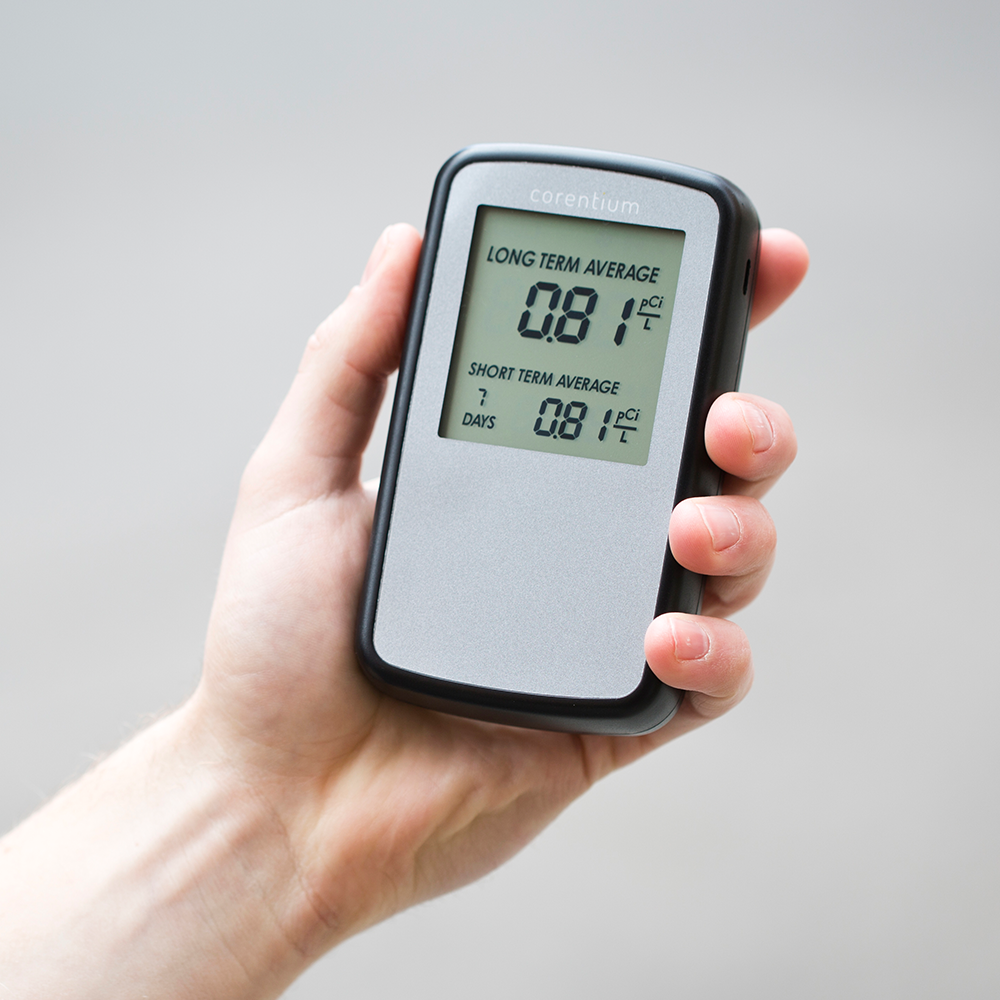 Like a smoke detector, they constantly analyze the air. Unlike a smoke detector, these devices display readings of radon levels on the device itself.There are short-term and long-term units, each of which has its own advantages and disadvantages. A short-term unit costs less but can only be used once. Short-term tests are good ways to get a quick, up front reading of the radon situation in your house. Long-term units are more expensive but can provide both short-term and long-term readings depending on the device.

Given the high risk of radon in Denver, residents would do well to get a long-term radon detector. Radon will always be an issue in Colorado and Denver County, and owning a long-term radon unit will allow you to stay safe against this deadly gas as long as you live in this state. The alternative is purchasing many short-term radon test kits, which would cost much more over time than a long-term unit. The lowest-cost short-term units are around $30 dollars, while a good long-term detector is $200. It should be noted that some long-term units may be cheaper than $200, but they require yearly calibration that you must pay for. So, a unit could be $150 but it might force you to send it back to the lab every year for a $70 fee. Look out for this as you research radon units.

There are a couple numbers to be aware of when you’re testing for radon in your home. The EPA defines a “safe” level of residential radon as 1.3 pCi/L, and an “action” level of radon as 4.0 pCi/L. If your home has an actionable level of radon or above, the EPA strongly recommends you take immediate measures to reduce that number. Given that the average level of residential radon in Denver County is estimated at greater than 4.0 pCi/L, you may very well have to take action. 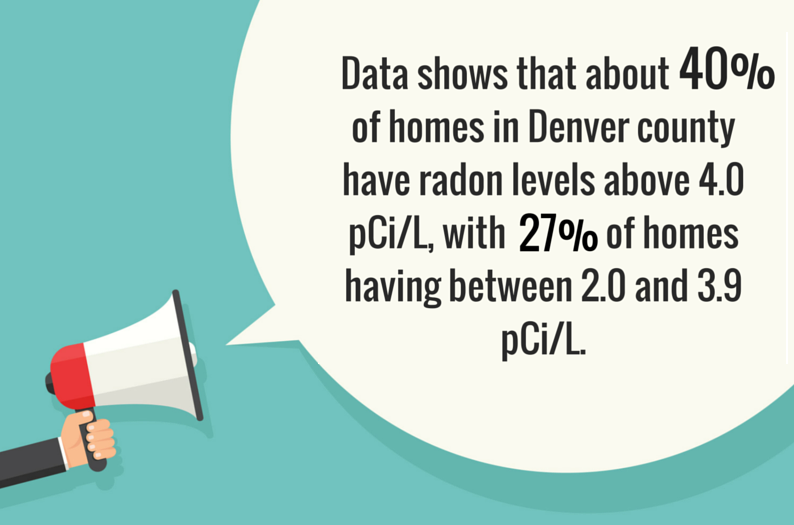 How to Reduce Radon in your Home

If you find radon in your home, there are several ways to reduce its presence. One of the simplest is to check your home’s foundation for cracks or fractures and fill these in. A crack in your foundation makes your home penetrable. Just as easily as radon passes up through rock and soil it will pass into your home through these cracks. So, filling in the cracks will ideally create a foundation that is sealed against gas. Monitor radon levels before and after you fill in these cracks to see if levels actually go down.

If you seal your foundation and radon levels remain elevated, you will need to install a radon mitigation system. The most common radon system uses a process called “sub-slab depressurization” to suck the air out from under your house and expel it into the atmosphere away from your living space. This involves sealing your foundation and running PVC pipes from beneath your foundation up through your house (or outside your house) to the roof, and installing a fan that pulls air through the pipes. After you install a radon system, it is important to keep monitoring the situation to make sure it actually reduces the amount of radon in your home. This is another reason why a long-term radon detector is recommended over purchasing many short-term test kits.

Due to the high levels of radon in Denver, radon should be a concern and something that you actively monitor if you live in Denver. If you haven’t tested your living space for radon, consider doing so. The average level of radon in Denver County is estimated to be more than the EPA’s recommended maximum of 4.0 pCi/L. Because radon causes cancer, Denver residents and Colorado residents, in general, would do well to take action against this radioactive gas.

Radon.com. “What is a safe and acceptable level of radon gas?” http://www.radon.com/radon/radon_levels.html