How we make the Corentium Home radon detector

What Goes Into the Best Radon Detector

The best radon detectors must foremost be accurate, and then other features become important such as portability within the home, displaying both long and short-term readings, and how long you can use it reliably. There’s also the simple but relevant feature of being attractive; it’s easier to keep active in your living space if you can stand to look at it, and even more so if you like how it looks.

So, when a radon detector is “best,” it must have a lot going for it. There are many factors that companies can optimize for that could make consumers love their product.

What is the best radon detector, then? According to consumer reviews and purchase habits on Amazon, the Airthings Home 223 Radon Detector is the #1 best seller in the radon detector category. With over 100 5-star reviews, consumers have made it clear that this is the radon detector they prefer.

We are, of course, biased. We make the Airthings Home Radon Detector. Nonetheless, we want to examine what specifically consumers love about our radon detector and reveal the different features people find useful.

Inside Scoop on Radon Detectors

Don’t worry, we know technical details can get very boring very fast. We’re going to keep this discussion limited to what you want to know: important features of the best radon detectors, how they make your life better, and why customers like them.

First of all, the Airthings detector is different from traditional radon test kits. “Test kit” is different from “detector” for a reason. A test kit is a single-use tool that is similar to old school film: exposure to light causes an image on the film. In the case of the test kit, exposure to radiation causes a chemical change in the test kit, creating a “radon picture” which can then be analyzed. These test kits must be left in a room for months to make sure they have the proper amount of exposure to the air in the room. Costs for these kits are not excessive; you can get a reliable test kit for as little as $30. Keep in mind, though, that $30 only covers one test, and only in one room. This kit is analog, which is to say it does not have a clear readout or display, so you won’t know your radon levels until the test is complete and has been analyzed. Radon detectors, on the other hand, detect and display the amount of radon in a room. They monitor radon levels, meaning they give you a constant awareness of how much radon you have in your home. This is advantageous because you are able to assess the situation, test different rooms, and monitor the effects of any action you take to remove radon from your home all with the same device. The Airthings Home radon detector is about $200 to a one-time test kit’s $30, but consumers have found the price to be justified. The device lets you test radon in multiple different rooms over as long or short a time period as you’d like (with accurate readings taking at least about a week). You can conduct nonstop tests and monitor different rooms at different times of the year--flexibility that would cost you many hundreds of dollars and be much more time-intensive if you used test kits. In this way, a test kit is good as an initial foray into radon testing, but a radon detector is the only feasible solution for people who want to make sure they are not living among radon gas in their home.

The Airthings Home detector digitizes what is traditionally an analog process; it gives users the accuracy of a test kit and the convenience of a digital tool. Other detectors do something similar, but they do not match the Airthings unit for a number of reasons. At its most basic, the team of physicists behind the Airthings detector have created a new, more efficient way to detect radon; one that is accurate, uses little energy, and is dependable over time.

The Airthings team is able to innovate on accuracy, energy use, and dependability because they are radiation and instruments experts. As former CERN physicists they saw a way to make analog-level radon detection digital, and they spent many late nights making it a reality. The team also features an expert from Texas Instruments whose specialty is in low-energy tech products, meaning the Airthings Home detector is optimized to run on very little battery power. For example, the device runs on three AAA batteries that will last as long as two years without replacement. The product initially came to market in 2011, and in the short time since then has become Amazon’s best selling radon detector. The only way that could happen is if it truly is better than the detectors it was built to replace.

Radon detectors are also preferred to test kits because they can tell you when radon levels in your home undergo change. Radon is a gas; it ebbs and flows based on a number of different factors. But this means an analog test kit, while accurate, could only show you radon levels at a certain time. At another time of year, your radon levels could be much higher or lower. Different countries have different “action levels” of radon, which is the point at which there is too much radon in your home and you should seek radon mitigation. If you are not monitoring radon actively, you might not notice when radon levels surge, putting your home above the action level. A radon detector, on the other hand, is always watching for you. It’s similar to a smoke detector in this way: it senses the environment for danger so you don’t have to.

The Airthings Home detector monitors radon by sensing what are called alpha particles. Alpha particles are emitted as by the radioactive gas radon, and the Airthings device has a sensor calibrated to detect alpha particles. This sensor, called a photodiode, is the digital version of film, creating a “radon picture” from how many particles impact the sensor. But you can’t just have any old photodiode in a detector and accurately gauge radon levels. There are many different particles that could “trigger” the sensor, so it must be specially designed to only register relevant particles. To rule out irrelevant particle impressions, the Airthings team developed a proprietary algorithm that allows the device to be sensitive to radon but not other particle “noise.” Consumers have verified in their Amazon reviews that this algorithm has made the Airthings device “accurate compared to a charcoal test.”

Another way the Airthings device is optimized for accuracy is in the physical design of its detection chamber. This chamber is where the detector analyzes your home’s air. Chrome is used in the chamber, which is constructed in such a way that it is a sort of cage against which unwanted particles are barred. Air is allowed to pass through a 0.2 mm space and thereby carry radon to the detector. What’s more, the chamber holds and analyzes air in 30 minute increments, using just 25 cubic centimeters to analyze the entire room. These design features allow the radon detector to render accurate readings for years. At the same time, they mean the device gets a more accurate reading and in less time than some radon test kits, with results displaying on the device after just one week. The device is able to give you a reading within a couple hours of use, although this is still regarded as insufficient time to analyze air quality in an entire room or basement.

Radon detectors should not only be accurate, they should also be dependable over the long term. This takes a high degree of quality control and attention to detail to ensure that the device is not going to lose accuracy or require maintenance after a year of use. Other radon detectors require just that: calibration every year, which forces you to spend much more on your detector over the long term than you should have to. This is one reason people have made the Airthings Home detector a best seller. The instruments are calibrated in advanced radon labs, making sure your device gives you the best results.

Radon is radioactive, which means it gives off radiation. It is part of what’s called a “decay chain” that starts with solid radioactive materials like uranium (most common). Uranium eventually turns into lead, but on its way from uranium to lead it goes through many intermediate steps, one of which is radon gas. As elements decay they emit alpha particles, which is what a radon detector looks for. But alpha particles are pretty weak; they can’t go through thin solids like paper or leather.

Radon decay is the main source of airborne alpha particles, but it also creates other radioactive materials you might come into contact with. Just as uranium decays and turns into other elements, so too does radon turn into other elements. Specifically, radon turns into polonium-218 and eventually polonium-214. These are tiny solids that bind to dust and smoke particles. And because they are solid they can stay in the lungs for much longer than radon tends to stay in the lungs.

Thus, detecting radon is important to protect your lung tissue from alpha particles in the short term and from radioactive solids in the long term. Both of these can lead to cancer, and because of the fact that radon gas levels ebb and flow over the course of a year it makes sense to get a radon detector to make sure the air you’re breathing is safe.

Radon gas is not to be taken lightly. The World Health Organization (WHO) estimates that 41,000 people die from radon-related lung cancer in Europe and the US every year.

Radon detectors have a lot of advantages over the effective but single-use test kit alternatives. If you plan to conduct multiple radon tests or want to monitor radon levels in your home, a radon detector is the cheapest option, and one that doesn’t require calibration each year will save you even more money. 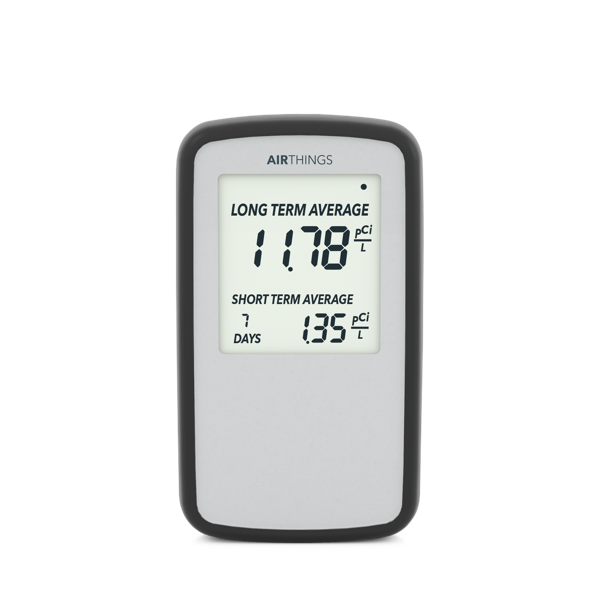 Meet Corentium Home by Airthings, a simple to use and wildly popular radon gas detector.