Magnus Carlsen is a Norewgian chess grandmaster, earning the title of grandmaster at just 13 years old. Since then, Carlsen has had an impressive career in chess becoming the World Chess Champion in 2013 and defending his title in 2014, 2016, and 2018. He is also the current World Rapid Chess Champion and World Blitz Chess Champion.

Currently, Carlsen is playing in the Meltwater Champions Chess Tour, and for the first time ever, he is measuring his air quality during his games to see what impact indoor air quality has on his chess performance. Airthings had the opportunity to interview Magnus on his experience thus far and reveal our newest product, the View Plus.

Master of chess, master of air?

We know that Carlsen is a chess grandmaster, but we wanted to see how much he knew about the air he’s breathing. Airthings CPO Erlend Bolle asked him four air quality questions. With just one out of four correct answers, Carlsen may not be a master of indoor air quality yet, but he has certainly experienced how air quality has affected his chess performances in the past.

In an interview, Carlsen admits, "If it is too hot, a lot of people, or bad air, it will definitely be more difficult to concentrate". Particularly when playing in crowded tournaments, he found it harder to concentrate because there is less oxygen. That is one advantage of this year’s virtual tournaments - no crowds, and full control of CO2 levels.

Carlsen has been an audience favorite across the tournaments. During the Skilling Open he was close to victory, but lost in the final round to grandmaster Wesley So.

Carlsen began to measure his air at the start of the next tournament - the Airthings Masters. For these weeks, he played from an undisclosed location, and while his air quality was healthy on average, his temperature was too high at 25°C. In the interview, Carlsen stated that he was aware of the warm temperature, but had adjusted to it over his stay. It’s not unusual to not notice unhealthy air quality factors, which is why it’s important to continuously monitor and take action when unhealthy air factors are detected.

Unfortunately, Carlsen was eliminated in the semi-final rounds, losing to grandmaster Daniil Dubov. 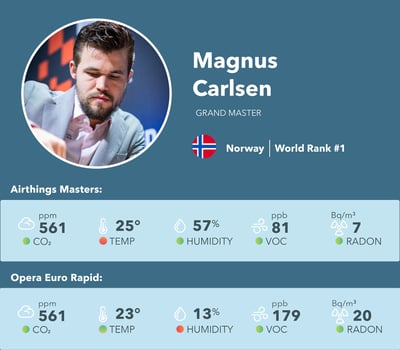 For the next major tournament, the Opera Euro Rapid, Carlsen was back in Norway and back to a healthy temperature.

In the interview, Carlsen stated he is most aware of the negative effects of high CO2 on his performance. Therefore, he likes to keep the window open most of the day to circulate fresh air, which contributed to the healthy CO2 levels we saw throughout the tournament. However, the cold outdoor air could have contributed to unhealthy humidity levels. After realizing that his low humidity could be why he was more tired than usual at the end of game days, Carlsen became more conscious of how often his window was open.

Unboxing the View Plus

At the end of the interview, Airthings CPO Erlend Bolle revealed Airthing’s newest and most powerful device - the View Plus. The View Plus will now measure PM 2.5, which is a mix of invisible particles that irritates lungs, agitates preexisting conditions, and causes heart attacks. With the addition of PM 2.5, you can take action to keep safe from the effects of allergens, pollution, wildfire smoke, viruses, and more.

Grandmaster Carlsen is the first person to receive the Airthings View Plus and will be measuring his indoor air quality in future tournaments with the new monitor. The Magnus Invitational begins tomorrow, March 13th. Tune in to watch the Airthings Ambassadors be the first to use the Airthings View Plus and follow along for our air quality insights!